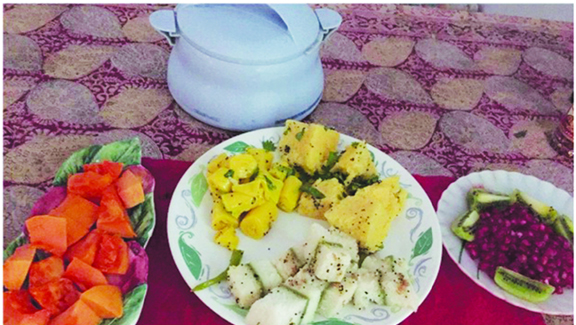 I became a vegan on October 2, 1996 after suffering a near-fatal head-on collision with a truck driven by a drunk driver. After 14 years on a strict plant-based diet, I decided to research plant-based street food for my upcoming ZeNLP Vegan Recipes Compassionate Cookbook. I decided to go to the Kumbh Mela (pilgrimage) in 2010, which takes place every 12 years. I knew millions of pilgrims were gathering at Kumbh Mela in Haridwar in 2010, street food vendors would follow and I could save and search many vegan recipes and photograph vegan street food in Haridwar which would save me money time and money. I had planned to raft down the Ganges from Kaudiyala to Rishikesh while going to Kumbh Mela in Haridwar.

The trip from Ahmedabad to Haridwar was uneventful except for the beautiful sunset clicked over the hills of Mount Abu. The train was crowded with devotees heading to Haridwar for the Kumbh Mela to reach on January 14, which was the most auspicious day for bathing in the holy Ganges since 1998. By a significant coincidence, at Haridwar station, I met three young women, each from England, the Netherlands and the United States, who were looking to get to Rishikesh! Soon the four of us were in a taxi for Rishikesh. The trip took us through the outer fringes of Rajaji National Park, where we could spot stump-tailed macaques! After checking in at Garhwal Mandal guesthouse in Rishikesh, we proceeded to Kaudiyala to complete the thrill of rafting while returning to Rishikesh. Body surfing while hanging on to the raft in the freezing waters of the river in mid-January was a chilling experience. Kathy, Kristen and Naomi, who were teaching English in China, were traveling to Rishikesh for a break. After returning to Rishikesh, I headed to Haridwar for the Kumbh Mela. “Lakhs” (millions) of pilgrims from all over India had gathered for a unique experience. Taking a dip in the freezing waters of the Holy Ganges at 4am in mid-January reminded me of my dip in Lake Mansarovar in Tibet! However, it was a boon for my immune system as all my cells were rejuvenated after swimming in the calm waters of this mighty river. It is surely one of the most powerful experiences to discover the power of mother nature. Exploring makeshift food stalls at Kumbh as a food sleuth, searching for 100% vegan delights (foods that contain no animal products or even traces of animal products) was another focus of my travels for my next book ” ZeNLP-The Power of Veganism.

Kumbh food stalls offered idlis (soft and fluffy steamed cake made from fermented rice and lentil paste) and dosas (rice and lentil pancake) jostling for space with samosas ( triangular-shaped dumplings), dhoklas (a nutritious Indian meal with a base of rice and fermented chickpea paste) and theplas (lat bread made from whole wheat flour, chickpea flour, millet flour and spice powders). The effects of the harsh winter were compounded by cold winds and light drizzle which appeared to engulf Rishikesh and Haridwar in January. Warming up near community bonfires and sipping hot ginger juice (as a strict vegan, I don’t drink tea, coffee or sugar due to the risk of adulteration of these foods with junk food). animal origin). Also, I don’t eat any factory-made foods sold on supermarket shelves. As a strict vegan, I avoid all foods containing caffeine, chlorine, fluoride, nicotine and iodine. I prefer to eat fresh fruits, vegetables, seeds, nuts and cereals! I never consume solids after sunset, but stick to water fasting instead! Community bonfires are a great place to socialize to learn about the latest happenings and find directions to reach the street vendors who sell the most delicious street food in town.

The trip from Rishikesh to Haridwar was like moving around in a caravan. Thousands of pilgrims walking barefoot to reach Haridwar on January 14. Along the way, I met peasants from Bhagalpur, Rabaris (nomadic pastoral community) from Gujarat, Bauls (folk singers) from West Bengal, villagers from Andhra Pradesh, sadhus (Hindu monk or ascetic who gives up all his past life and take the path of penance and austerity to achieve enlightenment) of Uttar Pradesh, and gypsies selling everything from sandalwood paste to vermilion. It was a “mela” (large crowd) in the truest sense of the word! Most pilgrims braved the effects of the cold by sleeping outside. Many ingenuous devotees slept on the banks of the river to avoid the early morning rush!

After reaching Haridwar, I woke up at midnight to prepare for the trek to the ghats (stairs) for a dip before the crowds started pouring in. It was extremely cold and visibility was limited to the first three steps. However, I trudged along the narrow path to reach the sacred river before dawn and take a rejuvenating dip in the rapids as the first rays of the sun hit the land. The most exciting part of the experience was the numb feeling in your fingers that made buttoning up your kurta (traditional, tunic-like garment) a feat! At the ghats, the pink ghagras (traditional attire worn by women) of Rabari women vied for attention with the saffron turbans of Rajasthan, which contrasted starkly with the gray ash-coated sadhus. It was a free for all with every man for himself. Street vendors selling towels had a blast. I had planned to travel from Haridwar to Allahabad to complete the next phase of my research on Indian vegan street food.

As a food detective, it was interesting to know the ingredients that went into Indian street food. I spoke to the hawkers, cooks and servers separately on different days just to reconfirm the ingredients that went into the street food. Most peddlers were honest and were unaware of my purpose in asking the questions, so they answered honestly. As a trained ZeNLP master, I was able to analyze their body language, eye movements, and breathing patterns to dismiss the few outrageous liars. The proof of the banana is in its consumption and as I am allergic to even micrograms or even picograms or nanograms of animal products in any food, I could tell the culprits from the flavor of the food .

One of the greatest benefits of being a pure vegan is having an extremely sensitive sense of smell. I can smell a minute of gas leaking in any apartment in my multi-story building with amazing accuracy. Moreover, there is latent DNA activation in every cell of the body which makes digestion efficient and increases blood flow to the palate and activates the taste buds, to make eating a divine experience. Every piece of food tastes heavenly, be it whole wheat puris (fried in oil) with alu-sabji (cooked in oil) that I had in Benaras, hot idlis in the steamed and coconut chutney I had in Srisailam, steamed vegetable momos, which I had in Rishikesh or the mint and coriander (seasoning) chatni I had in Jasidih . My taste buds have come alive since I became a strict vegan in 1995.

The wide range of street food sold at Kumbh Mela was mind blowing. However, since I was looking for 100% pure vegan food, I could skip the vast majority of foods containing animal products. But there were a few little pockets that did lip-smacking vegan food, cooked the traditional way. Fruits and vegetables were in abundance. Be it the many stalls selling fresh lime juice, vendors of nimbu-pani (lime juice) or shops selling almonds, nuts and raisins. I had vegan street food only as part of my vegan food research. During most of my travels, I have opted for fresh fruits, nuts and raisins. This diet is known as the raw vegan diet in ZeNLP. Staying in a tent on the banks of the Holy Ganga was a great experience. Waking up at midnight to the soothing, gurgling sound of flowing water, gazing at the starry sky bathed in moonlight in biting cold will remain etched in my psyche forever! Meditating on the tiny pebbles that carpeted the banks of the river made it possible to connect to the primordial elements!

Bathing in the Holy Ganges on the day of the eclipse was a soothing experience. I could feel cosmic energy permeating the air as I walked along the banks of the river to watch the crimson sunset. You could also see the play of the elements as fire, water and earth played their part to perfection. Morning fog, mist, and frost representing the earth element, the waters flowing at noon, in the absence of the sun, representing the water element, and the crimson sunset were a fitting ending for the fire element. . The calm, serenity, peace and tranquility experienced while meditating on a bed of stones while watching the rapids of the river connect to the macrocosm is unparalleled. It reminded me of my trek to Kailash Mansarovar along the banks of the Kali River, where I had meditated on giant stone slabs that were strewn along the banks of the river. Impromptu showers were my constant companion during my journey through Rishikesh to Haridwar. After spending a week exploring vegan food here. I returned to Ahmedabad. The photographs of the delicious street food recipes explain my dining experience at Maha Kumbh Mela. (Murli Menon, is a travel writer, stress management consultant and author based in Ahmedabad, India. He is the author of “ZeNLP-Learning through stories” published by The Written Word Publications, “ZeNLP-the power to success” published by Sage publications and “ZeNLP-the power to relax” by New Dawn Press. [email protected])

Save $130 on your first four boxes of Meal Kits